Building the Best Pizza in Town 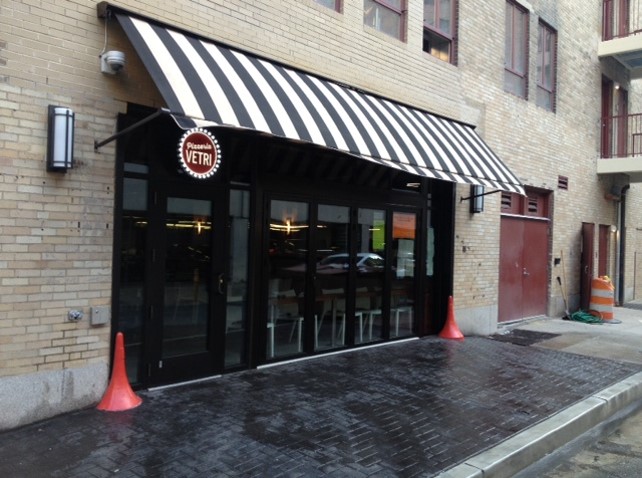 Built into a former garage entrance off Chancellor Street, Blue Rock overcame the challenges of limited space created by sloped ceiling and floor. The tremendous amount of mechanical, electrical and plumbing work had to fit within the constraints of this limited area.

“It was a pleasure having the owners involved,” said Cameron Barr, Blue Rock’s Senior Project Manager. “The owners’ understanding of the construction aspects of the project aided in the scheduling and coordination of intricate parts of the work.”

Inside Pizzeria Vetri are floor-to-ceiling glass doors with a beautiful white-tiled dining room and red-accented bar with an open kitchen. Custom mosaic tile from Italy was incorporated within the concrete slab and sets the pizzeria apart.

“The project had to be shut down for one week while the floor was installed,” said Barr.  “Little pieces of thin tile were set throughout the space then topping had to be poured over the slab and ground down without causing any damage to expose the tiles. It’s a beautiful look.”

One of the first obstacle 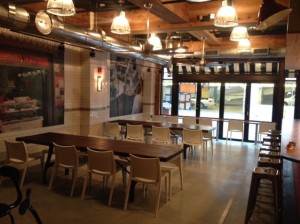 s was to install a state-of-the-art Renato pizza oven, weighing approximately 12,500 pounds. Placement of the oven, which burns both wood and gas, was very specific.  It had to be locked into steel beams in order to support its weight.  Once it was locked in, it did not move and the remaining work continued around the oven the entire length of the project.

Attached to the oven is double wall, stainless steel, welded ductwork that exhausts the oven’s heat and runs along the slope of the ceiling.

“Originally, the ductwork was designed to run straight,” said Barr.  “With the owners’ involvement at the site, an excellent decision was made to run the ductwork flush with the slope of the ceiling making it more attractive and less noticeable to patrons.”

The new exterior storefront includes an outdoor and open window seating with a sidewalk of integral charcoal stamped concrete.

“The owners wanted a storefront that could be open to the elements and this feature actually slides open and folds away,” said Barr. “The sidewalk did not meet ADA requirements so it was demolished and a new compliant one installed. The charcoal stamped concrete separates them from everyone else on the block.”

“I think I can speak for everyone when I say, hands down, this was the best, easiest, most professional and courteous job we’ve ever had the pleasure of being a part of,” said Vetri. “Thank you sincerely from all of us!”

As a thank you for a job well done, Pizzeria Vetri celebrated with an open house for all who worked on the project and their families. 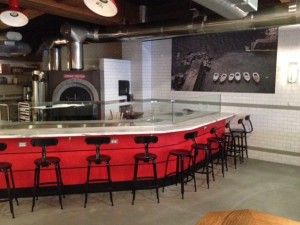 “We just completed what I’m hoping is the first of many projects with Blue Rock Construction.  My only regret is that they weren’t involved in our first seven restaurants!

“The team that Cameron Barr put together with his superintendent Greg Covaleski and project administrator Theresa Glaser were far and away some of the most professional people with whom I’ve had the pleasure of working. Each and every deadline was met (or beat), and on the occasion we were met with a challenge or an obstacle, immediate resolution was reached in concert with the Vetri Family team.

“At no point during the construction did I ever feel like I had to be there.  Simply knowing that Greg was onsite was an assurance that the job was getting done correctly.  On occasion I would even show up at night to see the progress made during the day to find Greg doing his own personal walk through insuring nothing was overlooked.

“The Pizzeria Vetri on Chancellor Street is a great showcase for what a truly professional team can accomplish.  Our organization is poised for growth, and with Blue Rock as a trusted partner I’m certain we will succeed.”

In 2013, Pizzeria Vetri debuted on Callowhill Street in Philadelphia as The Vetri Family’s only restaurant solely dedicated to the fine art of authentic Italian pizza-making. Since, it has risen to become one of Philadelphia’s must-visit dining destinations earning critical acclaim from such publications as the Philadelphia Inquirer to GQ magazine, who named it one of the country’s top 25 best new restaurants of 2014. 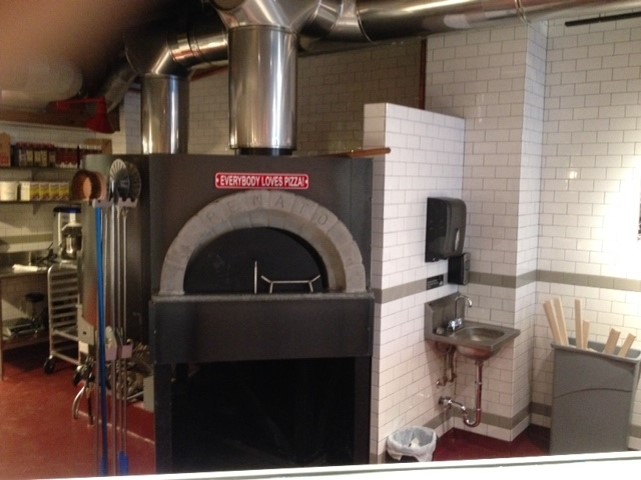 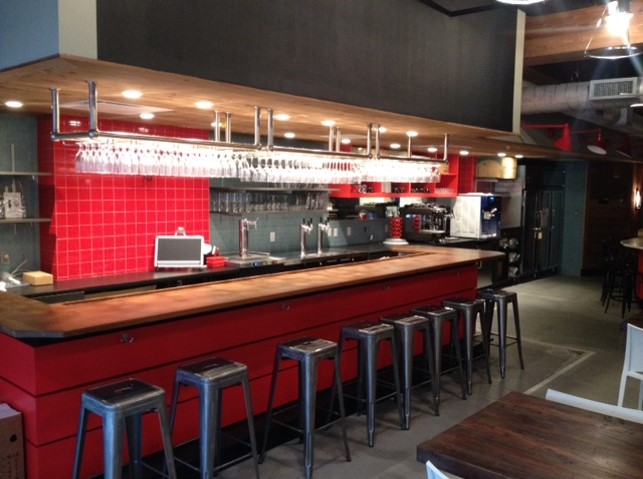