Back in October, the inaugural Blue Rock Golf Outing helped raise over $77,000 to benefit Dr. Tom Catena and his life-saving mission in the Nuba Mountains in Sudan.

Today, we’re happy to give you an update that includes some great news from filmmaker Ken Carlson, producer of the documentary, “The Heart of Nuba.”

As for the documentary, “The Heart of Nuba” secured a domestic theatrical release and will premiere at the United Nations on April 6. There’s also a two-year U.S. licensing deal with Hulu. 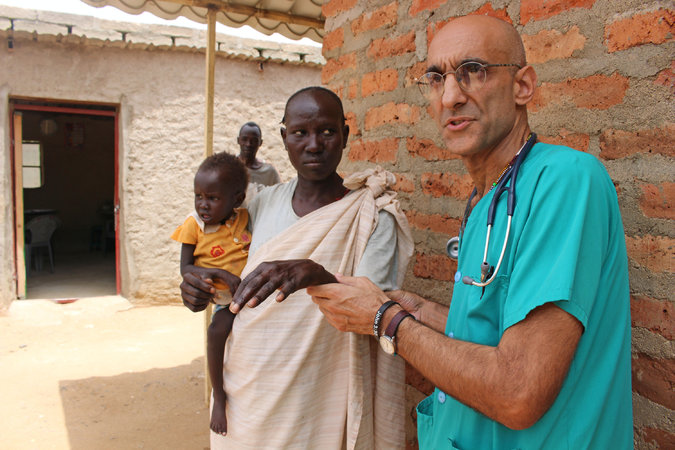 Also, Catholics in Media Associates unanimously voted “The Heart of Nuba” as the first recipient of the CIMA Social Justice Award. The ceremony takes place March 16.

According to Ken, the film reached Sudanese President Omar Hassan al-Bashir, the man responsible for the genocides over his 26-year reign. After screening the documentary, the president called for a ceasefire in the Nuba Mountains and the Blue Nile State. So far, the ceasefire has lasted one year (February 2017).

In September, Ken interviewed al-Bashir, and it’s been cut into the film’s ending.

“So far, we have amassed over 70 non-government agencies in our Human Rights Coalition, including Human Rights Watch, Amnesty International, Act for Sudan, and Project Enough,” said Ken. “By the way, not only have we raised awareness, we have collected over $300,000 for Dr. Tom Catena and the Mother of Mercy Hospital! All of this has helped to keep al-Bashir’s proverbial feet to the fire, if you will.”

As for Dr. Tom, he continues to fight the good fight at Mother of Mercy Hospital. Last year, Dr. Tom was award the prestigious $1 Million Aurora Prize for Awakening Humanity, recognizing the thousands of lives he has saved.

Thanks again to everyone that helped organize and participate in the golf outing. We’ll keep you posted when we announce the date for the second annual Blue Rock Golf Outing.

If you missed the photos from last year’s golf outing, they’re still available by clicking HERE.